Home / ABOUT US / The original Paracelsus

Paracelsus was the father of alternative medicine in the Western world. A true Renaissance man renowned for his work as a physician, botanist and chemist, Paracelsus is best known for insisting that the practice of medicine be based on evidence rather than upon the conventions of the Fathers of Medicine passed down from antiquity. He opposed bloodletting, the most common treatment of his time, because he recognized that it only weakened patients. 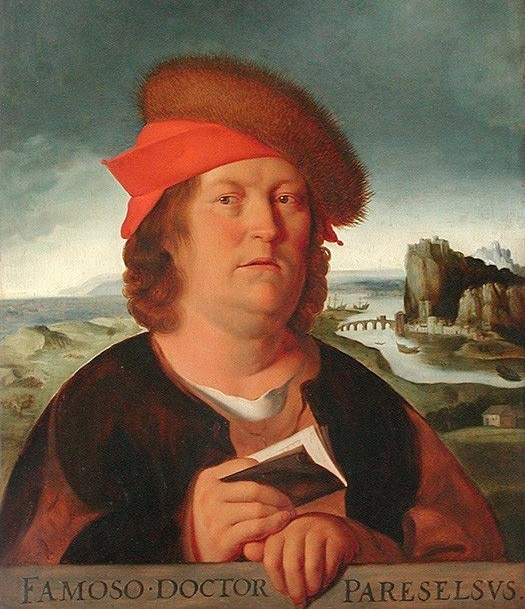 His theories were based on what he learned from his cases, experiments, and travels, which took him from his native Switzerland throughout Europe. He’s credited today with the invention of toxicology, the standardization of dosage in pharmacology, the first medical uses of laudanum and mercury, the doctrine that physicians must master the physical sciences, the connection between environmental toxins and disease, the therapeutic use of diet, and the discovery that illness often has an emotional or psychological origin.

Paracelsus was inherently holistic in his approach, seeing the connection between the individual and the universe as between microcosm and macrocosm. This was the context in which he sought medicines in herbs, minerals and food, and asserted that the physician should support the intrinsic power of the body to heal.

Not surprisingly, the teachings of Paracelsus influenced modern medicine for centuries. But as Western medicine evolved, it became increasingly reductionist and specialized. Because of Paracelsus, Germany and Switzerland retained a distinct medical tradition that remained stubbornly alternative and holistic. Today both countries offer therapies that are unavailable elsewhere.  In fact, Switzerland is the only country in the world today which enshrines access to alternative medicine in its national constitution as a basic human right.

I had the best experience at Paracelsus Clinic, where I went to address health problems of deep fatigue, Hashimoto’s disease and chronic back pain.

I would like to take this opportunity and express my thanks to the entire staff and such wonderful team who don’t realize what positive impact they have on other people lives. By now, I would be probably suffering from negative side effects of chemotherapy and today after first few weeks of treatment at Paracelsus, I feel so energized and truly looking to another day as very special day. You all gave me chance to take my life in my own hand, teach me own the responsibility for my health and gave me chance for better life. This is something, I will never forget and truly looking forward to April ’15 for my next treatment at Paracelsus. I had privilege to meet highly professional, but so friendly nurses and doctors at your clinic and despite their busy schedules to look after so many patients like me, they still find energy for being nice, kind and providing their energy back to all patients. Through chats with other patients, I came across similar experiences and positive discussions, that just shows testimony how well the clinic is run and how focused the clinic is on treating patients well.

I was diagnosed with chronic Lyme disease in the summer of 2007.  By the fall of 2013, I had exhausted the knowledge base of 6 doctors in the states.  I found the Paracelsus Clinic by word of mouth.  I was so frustrated with my progress, or lack thereof, that after doing my research on the clinic and talking with 2 Lyme patients that had been treated at the clinic, I decided to commit a month of my life to focused healing.

My symptoms were problematic in that I work as a Professional Ski Patroller.  I must be able to ski all day long and communicate with injured skiers in stressful situations. As summer 2013 turned into fall, my symptoms became more pronounced.  I began stuttering and was unable to form complete sentences.  At times my mouth would physically lock up and I was unable to verbalize the thoughts in my head.  In the afternoons, my body would get completely and utterly tired. I did not like riding as a passenger in cars because at times I suffered from severe motion sickness. This is when I moved to Switzerland and immersed myself in the healing process.

It has been 2 + months since I left the clinic.  I would like to say that I have not felt this good in a long time.  I can honestly say that I have had no recurrence of the symptoms that led me to seek help at the clinic.  My speech is back to normal, my thoughts are not foggy, my energy is back, and my motion sickness has gone away.  I am skiing 5 days a week and helping injured skiers with confidence.  What a difference some focused healing time makes!!